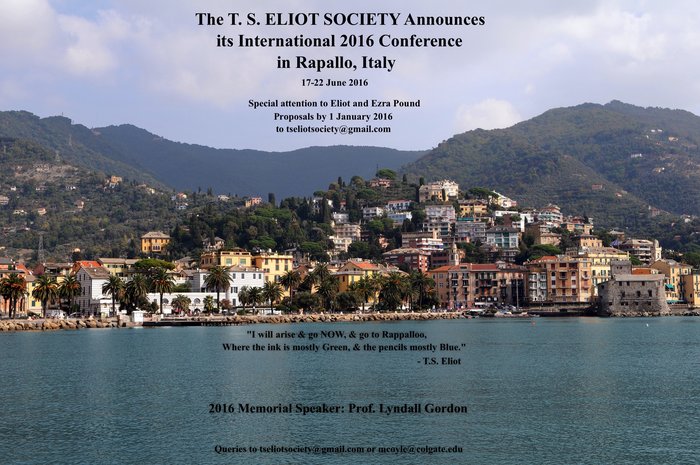 The Eliot Society is pleased to announce the addition of a third peer seminar for our Rapallo conference. Led by Peter Nicholls, this seminar invites 5-page papers treating any aspect of the connection or relations between T. S. Eliot and Ezra Pound.

Peter Nicholls, the Henry James Professor of English at New York University, has written widely on Ezra Pound and modernism more generally. He is the author of Politics, Economics and Writing: A Study of Ezra Pound’s ‘Cantos’ (1984); “Bravado or Bravura? Reading Ezra Pound’s Cantos,” in Modernism and Masculinity: Literary and Cultural Transformations, ed. Lusty and Murphet (2014); and “’You in the dinghy astern there’: Learning from Ezra Pound,” in Ezra Pound and Education, ed. Yao and Coyle (2012).  In the wider field of modernist studies, his Modernisms: A Literary Guide  (1995; 2nd expanded ed. 2009) is essential reading, and he has also edited Regarding the Popular: Modernism, the Avant-Garde, and High and Low Culture (with Sascha Bru, 2012); and On Bathos: Literature, Art, Music (with Sara Crangle, 2010).

Participants will pre-circulate short position papers (5 pp) on the topic of the seminar by June 1, 2016 for discussion at a two-hour meeting on the last day of our conference, Tuesday, June 21.  Membership in the peer seminars is limited to fifteen in each, on a first-come, first-serve basis. Please enroll by April 15, by sending an email with the subject line “peer seminar” to This email address is being protected from spambots. You need JavaScript enabled to view it. with your contact information. No paper or proposal is required to enroll.

The Eliot Society is also sponsoring two other peer seminars, to be held on the first day of our conference, Friday, June 17:

T. S. Eliot and the Global

This seminar invites papers that explore the transnational range, dynamics, and subsequent influences of T. S. Eliot’s poetry. Although Eliot has often been considered either canonically English or quintessentially American, we will examine his poetry’s overflowing of national borders, its global horizons and reach. Possible topics for exploration include:

Participants will pre-circulate short position papers (5 pp) on the topic of the seminar by June 1, 2016 for discussion at a two-hour meeting on the first day of our conference, Friday, June 17.  Membership in the peer seminars is limited to twelve in each, on a first-come, first-serve basis. Please enroll by April 15, by sending an email with the subject line “peer seminar” to This email address is being protected from spambots. You need JavaScript enabled to view it. with your contact information. No paper or proposal is required to enroll.

Jahan Ramazani returns to the Society this year after giving the 2013 T. S. Eliot Society Memorial Lecture on “T. S. Eliot, Poetry, and Prayer.” He is University Professor and Edgar F. Shannon Professor of English at the University of Virginia and, most recently, author of Poetry and Its Others: News, Prayer, Song, and the Dialogue of Genres. His A Transnational Poetics (2009) won the 2011 Harry Levin Prize of the American Comparative Literature Association, awarded for the best book in comparative literary history published in the years 2008 to 2010. Previous books include The Hybrid Muse: Postcolonial Poetry in English (2001); Poetry of Mourning: The Modern Elegy from Hardy to Heaney (1994), a finalist for the National Book Critics Circle Award; and Yeats and the Poetry of Death: Elegy, Self-Elegy, and the Sublime (1990). He edited the most recent edition of the Norton Anthology of Modern and Contemporary Poetry (2003) and, with Jon Stallworthy, The Twentieth Century and After in the Norton Anthology of English Literature (2006, 2012). He is also an associate editor of the new Princeton Encyclopedia of Poetry and Poetics (2012). He has received a Guggenheim Fellowship, an NEH Fellowship, the William Riley Parker Prize of the MLA, and the Thomas Jefferson Award, the University of Virginia’s highest honor.

The recent groundbreaking publication of three volumes of Eliot’s Complete Prose has led to a resurgence of interest in his criticism and other prose writings. Our 2015 peer seminar with Ronald Schuchard, general editor of these volumes, will focus upon any aspect of Eliot’s non-fiction prose, including:

Ronald Schuchard, the Goodrich C. White Professor of English Emeritus at Emory University, is a leading scholar of Eliot and Yeats.  He is general editor of The Complete Prose of T. S. Eliot: The Critical Edition, a treasure trove for Eliot scholars that, when finished, will contain nearly 1000 essays, book reviews, commentaries, and other prose works by Eliot, most never before collected and some previously unpublished. The first three volumes have recently appeared, published on Project Muse by Johns Hopkins University Press and Faber & Faber. Schuchard’s editing of Eliot began with the poet’s Clark and Turnbull Lectures, The Varieties of Metaphysical Poetry. His study of Eliot’s intellectual and spiritual development, Eliot's Dark Angel, won the Robert Penn Warren-Cleanth Brooks Award for Outstanding Literary Criticism. Schuchard’s work on Yeats has also received awards, including The Last Minstrels: Yeats and the Revival of the Bardic Arts (winner of the Robert Rhodes Book Prize of the American Council for Irish Studies and co-winner of the book prize of the Modernist Studies Association). He has edited several volumes of The Collected Letters of W.B. Yeats, including Volume 4 (2005), which won the MLA’s Morton N. Cohen Award for a Distinguished Volume of Letters. Founder of the T. S. Eliot International Summer School, Schuchard is a permanent Senior Research Fellow at the Institute of English Studies at the University of London, a Fellow of the American Academy of Arts and Sciences, an Honorary Member of the South Atlantic Modern Language Association, and an Honorary Member of the T. S. Eliot Society.

Clearly organized proposals of about 300 words, on any topic reasonably related to Eliot, along with biographical sketches, should be emailed by 1 January 2016, to This email address is being protected from spambots. You need JavaScript enabled to view it., with the subject heading “conference proposal.” For this special international meeting, the Society is also pleased to welcome Ezra Pound society members and proposals pertaining to any aspect of the connections between Pound and Eliot.

Each year the Society awards a prize to the best paper given by a young Eliot scholar. Graduate students and recent PhDs are eligible (degree received in 2012 or later for those not yet employed in a tenure-track position; 2014 or later for those holding tenure-track positions). If you are eligible for the award, please mention this fact in your submission.  The Fathman Young Scholar Award, which includes a monetary prize, will be announced at the final session of the meeting.

Our annual T. S. Eliot Memorial Lecture will be given by Lyndall Gordon, author of Eliot’s Early Years and Eliot’s New Life. Eliot’s Early Years, winner of the British Academy’s Rose Mary Crawshay Prize, brought attention to Eliot’s spiritual and personal life and has shaped Eliot studies since its publication in 1977. A revised version, T. S. Eliot’s Imperfect Life, was published by Virago in 2012. A noted literary biographer, Gordon has written about Virginia Woolf (A Writer’s Life, winner of the James Tait Black Memorial Prize), Charlotte Brontë (A Passionate Life, winner of the Cheltenham Prize for Literature), Mary Wollstonecraft (Vindication, shortlisted for the BBC Four Samuel Johnson Prize), Henry James (His Women and His Art), and most recently, Emily Dickinson (Lives Like Loaded Guns: Emily Dickinson and her Family’s Feuds). She has also written the memoirs Shared Lives, about a group of girls growing up in Cape Town in the nineteen-fifties, and Divided Lives: Dreams of a Mother and Daughter.

Gordon grew up in Cape Town, South Africa, emigrating to the United States at the age of 22 to study and eventually teach American literature at Columbia University in New York.  Here she wrote her doctoral dissertation on T. S. Eliot under the direction of Sacvan Bercovitch. In 1973 she moved to England to become a Rhodes Fellow at St. Hilda’s College, Oxford. Her personal mode of biographical writing was not immediately accepted.  As she writes:

I made no concession to the “death of the author” on the one hand nor, on the other, to “definitive” biography which seemed a fiction of the marketplace. My deviant form of biography remained something to be cultivated in private, looking past the present to the future development of this genre, and hoping it might come into its own as an art…. Of late, biography has drawn closer to the approach that outraged some reviewers of Eliot's Early Years in the late seventies.

Gordon became a lecturer at Jesus College and continued to research and write biographies, retiring from teaching after twenty years in order to devote herself full-time to writing. She is now Senior Research Fellow at St Hilda’s College. Gordon is also is a Fellow of the Royal Society of Literature and member of PEN.  She is married to Professor of Cellular Pathology, Siamon Gordon; they live in Oxford and have two grown daughters.